This is part 2 of my impression on Russian Captured Boy’s A Thievish Slave. If you haven’t read the first part of this bondage short story yet, click here.

The thievish slave had a name. It was Sergei.

The master didn’t even know why he came by the slave’s name. Normally he treated his slave as nothing more like a piece of furniture. Well, there were times when a piece of furniture was given a name, especially when there was something remarkable about it. He told himself that was just the case with him.

Sergei would actually look great braving some rough bastinado. That would please the master more than ever.

“Guard, set this slave up. I want to play with his feet.”

The guard immediately complied and grabbed Sergei roughly down to the floor, pushed his knees up, put a stick under them, and grabbed his arms around his butt and made him embrace it. It was a sight to behold, and the master was obviously enjoying it.

The master retrieved a rattan stick from the cabinet, walked to where the slave lay, and let the tip touch the sole of Sergei’s right foot. He pricked a little, not hard enough to draw blood. He wanted to see how the slave would react. He also loved building the anticipation.

If he attacked the soles right away, the physical pain would immediately subside. It was because the slave had already anticipated it. If you, however, caress a certain spot before you hit it hard, the unexpected could intensify the blow. It’s amazing how the mind works.

Upon relishing such thoughts, he was ready to deliver. He swung the rattan and hit the slave’s soles with as much force he could muster.

“AAAaaaaaaaHhhhhhh!!!!” The slave couldn’t believe the pain emanating from the soles of his feet. He could only screech. At that time he was already learned enough to know not to beg the sadistic master to stop. Doing so would only encourage him to make it worse. As much as he wanted to, he managed not to say those dangerous words.

The master continued to hit them about ten more times before he became satisfied.

“Okay, lay him down on the bench and tie his hands above his head.”

The guard, like the drone that he was, went to untie Sergei and dragged him over to the concrete bench, pulled his arms up and cuffed them above his head. 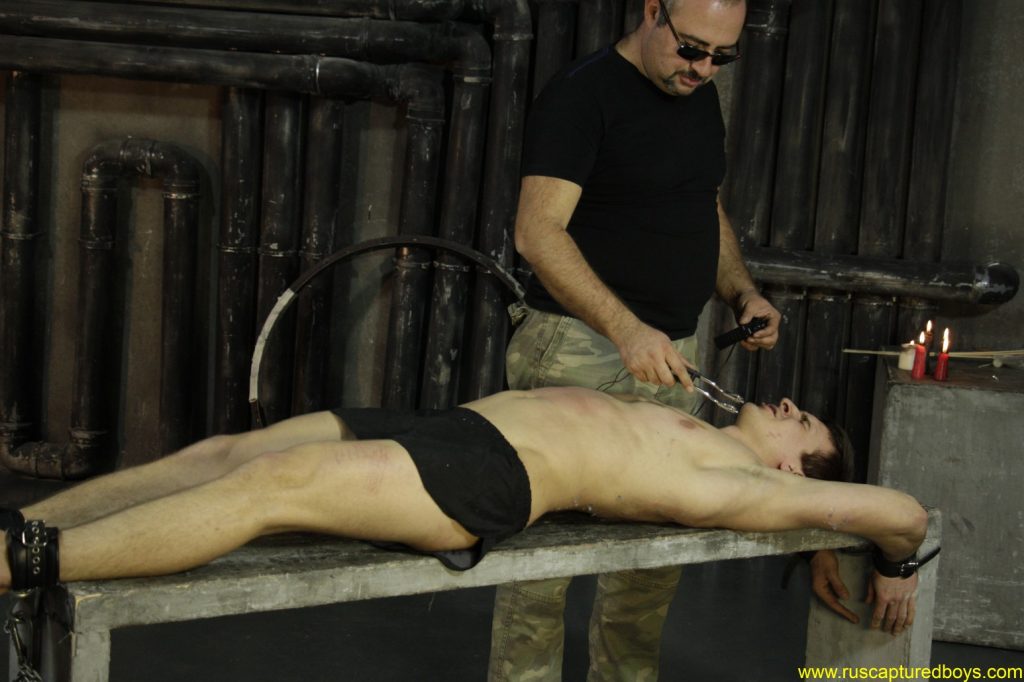 The master lit a couple of candles and let the fire burned to melt the wax. When there was enough, forming a scorching puddle of wax, he took them and walked over the bench where the poor slave was set down.

Without further delay he tilted the candle wax just right above the slave’s chest.

The hot wax touched the slave’s chest. It crusted after a few seconds forming map-like shapes all over his torso. He continued pouring them on various parts of the slaves upper body, as if the candle was a brush, which a painter stroked in random places on the canvas to form an abstraction.

The master could only admire the results of his work and smiled.

To view the related video, check out Russian Captured Boys!