If you haven’t read the previous part of the short story inspired by the bondage scenes on Bound Up Boys, click here. The following fiction below contains non-consensual sex theme that may offend. Do not proceed if you’re sensitive to that type of material.

It was mind numbing.

The brain was a fascinating creation. All of a sudden, you couldn’t even get a sense of your immediate surrounding even though you knew that you were still alive.

Trey had lost track of time. He was conscious and slightly aware that he was still breathing, but there was nothing else he felt but the pain from the whipping.

The man who claimed to be his master relished the whole experience of inflicting pain to his helpless victim, which in this situation was none other than Trey himself.

His resolve was weakening, and all he wanted to do was to give this man whatever he wanted if only he’d stop beating his back.

He would even happily suck the man’s dick if that was what he wanted… just please stop.

In a few moments, Trey felt the man withdrew from lashing out. He wasn’t sure if he should feel thankful or dreadful.

Was he actually done?

Or was he just resting?

“I think you’ve had enough beating for now boy.” The man spoke through heavy breathing from the physical exertion of swinging that whip. “Since your new job is to be a slave, your training will continue on how to sexually satisfy your master.”

That last statement confirmed what Trey dreaded but he was already conditioning his mind to accept that this was how things would go…at least for now.

Master Alan pushed the control button to bring down poor Trey from the suspension crane. He didn’t stop until the prisoner was resting on his knees.

He didn’t remove the leather strap binding the captive’s wrists, which secured him in place. It was a security for the next course of his training.

The prisoner hesitated for a minute but complied shortly after. He opened his mouth but you could see his face breaking into an expression of disgust. Even if he couldn’t see through the blindfold, he somehow knew what was coming into his mouth. 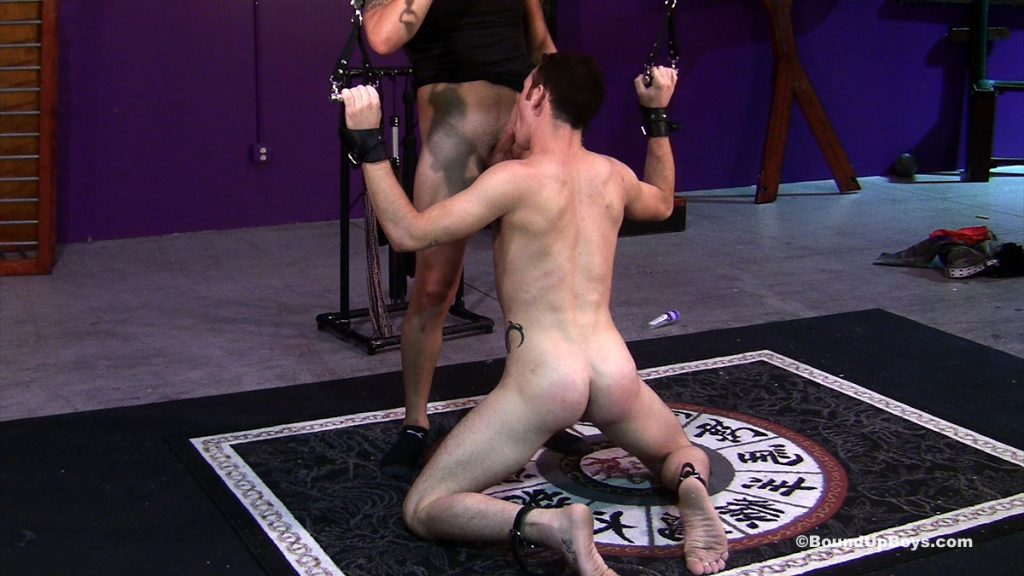 “You better not use your teeth, bitch, while you suck on my dick.” Master Alan issued the warning just in case. At this point he was almost certain that the captive wouldn’t do something silly after the suffering he just went through earlier. His secure binding also served as a reminder that there was no other way to go but follow the command.

Trey felt the master’s dick slide into his mouth. His tongue made contact with the underside of that hard shaft. His first reaction was to bite it until it bled but thought of the consequences if he carried out that silly move.

He choked on it because he never sucked a dick before. Despite the gentle movement, he was still having a hard time to keep up.

Master Alan didn’t pound on the boy’s mouth. He knew that a straight man like Trey would take a bit of time to learn sucking dick. He didn’t intend to be rough in the beginning. The fact that the boy had a dick in his mouth was more than enough for Alan to feel very satisfied.

Alan pulled out his dick from the captive’s mouth. He dragged the victim over a padded bench and the tied him down. This put him in an ideal position to get fucked!

“Master, please don’t do this! I’ve never been fucked before. Please!!!” Trey begged. He didn’t think that it would go this far. He thought that sucking dick was as far as it would go, then maybe the prick would let him go. It sounded like wishful thinking but he could only hope.

“Silence! You do not get to choose what happens from here on. You only need to obey. DO YOU UNDERSTAND, BOY?” Master Alan furiously asked while painfully pulling on a handful of hair.

“Yes, master,” was all Trey said as he began to whimper.

A few moments after Trey felt the master’s fingers drilling into his ass and putting something slimy and gooey. He was lubing him up. It was coming. There was no escaping it.

He then felt the head made contact at the entrance. It was pushing in slowly. At the same time, the pressure led to pain and Trey felt like he was being torn in half.

The invasion continued until he felt the full length drilling all the way in.

The Master continued to pound in and out. At the same time Trey felt his manhood fading away.

If you enjoy this short story, you can enjoy it a lot more by watching the video on Bound Up Boys!