If you haven’t read the first part of this Russian Captured Boys bondage series yet, check it out here!

Despite the hundred lashes that landed on different parts of his body, leaving a web of wicked welts all over, Roman was still in a state of disbelief.

Would this really be his fate from here on? A life of perpetual bondage? A guinea pig for different torture experiments conducted by the people that made up the Enforcement. His first day in their grasp had not even reached its peak yet, but he already experienced the intense pain that he could only imagine before.

The pain wasn’t just physical, but also psychologically draining. He began to understand that the Enforcement was true to its mission of punishing anyone who had gone rogue from their responsibilities to the government. There were no second chances for the citizens, because the government never took a chance when it came down to it.

“I see that you were able to withstand the whip,” said the man with dark glasses. “That’s good.”

Roman could only moan in response. The beating he took had taken its toll on his ability to produce any intelligible speech.

“Don’t drain your strength speaking. There’s really no need for that,” the man said while placing the single tail down to the concrete table attached to the adjacent wall from Roman. “I will need for you to lend me your ears, however, and make sure you comprehend what I’m about to say.” 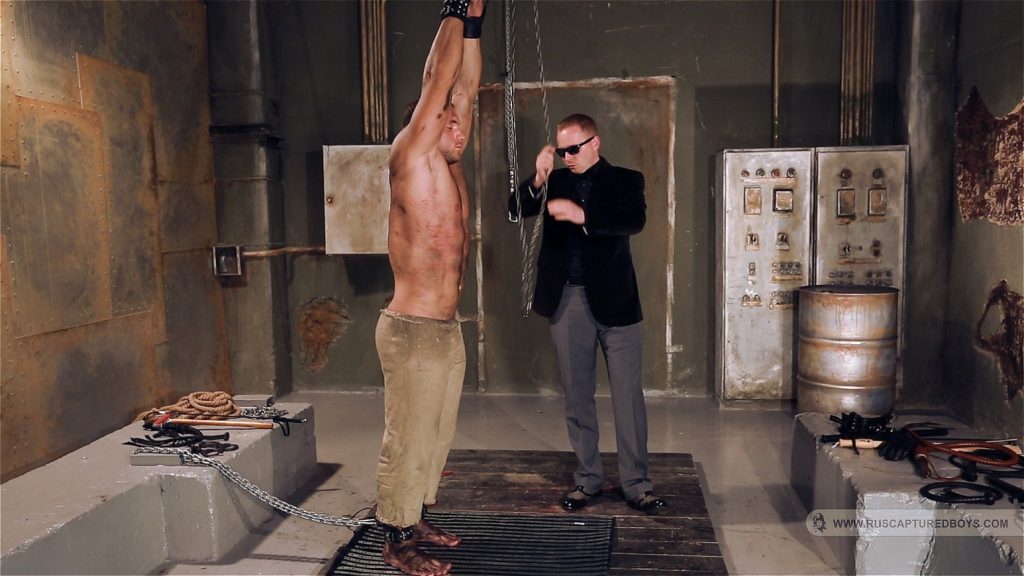 Roman tried to regain his alertness despite being bound in the same position for hours. He already proved earlier that the Enforcement and their minions had been true to their words, and even threats.

“In a short while, I will have one of the guards place a metal mat on where you presently stand. Wires will be attached to them and connected to the box that I’m holding here.”

Roman scrutinized the grey box that the man was holding. It looked like an old radio machine with switches for the tuning and volume. He wasn’t naive enough to think that the switches to that specific box had the same functions.

“Now I can easily increase the voltage transmitted from the box to the metal mat. If you don’t want to get electrocuted, all you have to do is lift your feet in the air and keep them that way. Simple, right?” The man asked with a smile on his face, as though he was offering Roman a platinum service at a golf course.

What the fuck! His body was covered in welts and bruises and his muscles were sore from the whipping, and now they would force him to support his body weight in the air through his aching arms.

Without much time to ponder, he surprisingly felt the first rush of electricity that surged through the soles of his feet.

“Aaaaahhhh! Fuck!!!!” Roman immediately lifted his feet and felt the strain in his arms right away.

“You see…you can easily avoid all of that if you just stay put. Now, I’m going to have this on full power for a bit and finish my drink. I’ll be back in five minutes.”

Roman wanted to scream for the man to come back but he knew he’d only lose the limited amount of strength to hold himself up. He restrained himself from doing just that and concentrated on bearing his weight through his sore arms.

There was a digital timer in front of him that the man deliberately set to five minutes.

He wasn’t even thirty seconds in and he could already feel that his arms would give in any moment.

He started to exert sound just like what he used to do when bench pressing to brace for the lift.

Three fucking minutes and fifty one seconds to go. How the hell was he going to keep his feet and legs up?

He could no longer bear his weight. It was now a decision of whether he should just withstand the painful electric shocks or the severe pressure on his arms.

He finally succumbed to pain and touched his feet on the mat. As soon as it made contact, he knew that his feet would burn.

There was not much of a choice. Roman realized that his life would just be a trade between one painful ordeal versus another form of agony.

After giving up his feet for just a little relief on his arms, the man came back when the digital timer hit precisely 0.

The man with dark glasses turned it off and he had the guards take the prisoner down. It evidently suggested that this prisoner’s training wouldn’t take much effort. The poor captive already looked a little docile, and he was barely introduced to electric shock training.

They would make a good profit out of this one. There was no doubt about it.