WARNING: The following short story is a work of fiction inspired by the series called Football Hooligan Slavery on Russian Captured Boys, a bondage fantasy site. It may contain language and images only intended for mature audience. The featured model is at least 18 years of age.

The ache was shooting down his arms, then bouncing off his neck. He could no longer feel his wrists. They became numb from the leather cuffs, which were tightly wrapped around them. 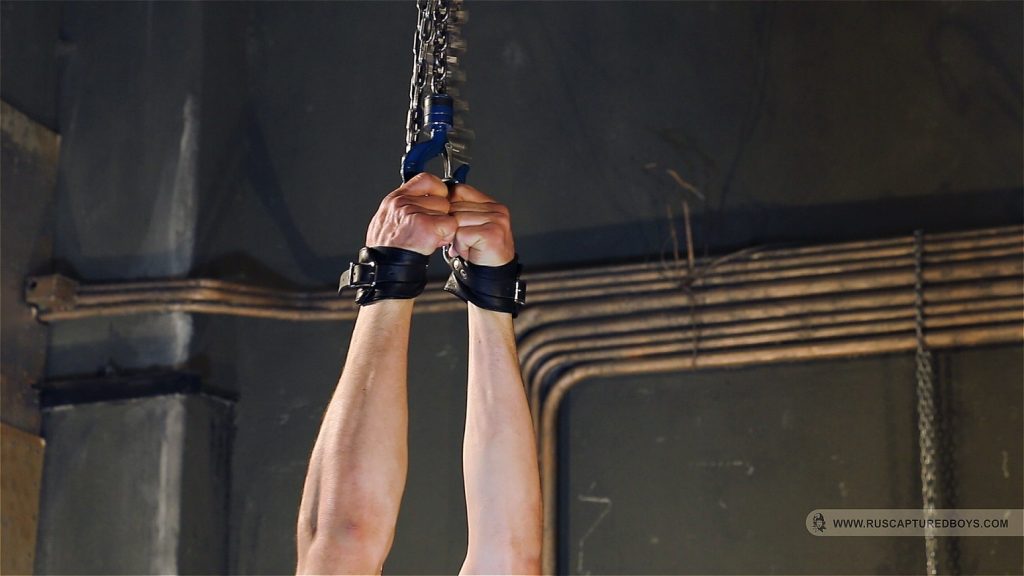 How long had it been? They must have left him in this awfully painful position for at least two hours, though it surely felt like it was close to ten, for time had been running so slow, especially when his attention was earnestly focused on the pain.

Three hours ago he was apprehended by a couple of stern looking men, claiming to be from Precinct 4. They accused him as the person causing havoc at the football stadium when he was just getting off his car. They also told him that he would be taken to the precinct where he could either deny or admit the guilt, and that he could contact his lawyer once they arrived.

He went with them, of course, wanting no more trouble for himself since he was quite confident about his stand. He was innocent and everything would be all right. He thought that he could just tactfully explain that it had been a mistake once they got to the precinct.

About ten minutes into the ride, one of the officers finally broke the silence.

“Stas,” was his perfunctory reply. He tried to sound brave, even though his confidence was slowly crumbling down.

“Well, Stas, you are in a very serious trouble.”

Before Stas could say something back, the other man seated next to him swiftly placed a handkerchief on his nose. He remembered struggling a little bit but then darkness immediately followed. It was the last thing he recalled three hours ago.

When he woke up he immediately felt the pressure on his arms. Well, that was usually the case when you realized that you were hanging in the air, with your arms the only leverage to support your whole body weight.

They also removed every single piece of his clothing, so he was on full display, dangling from the ceiling, and very naked. 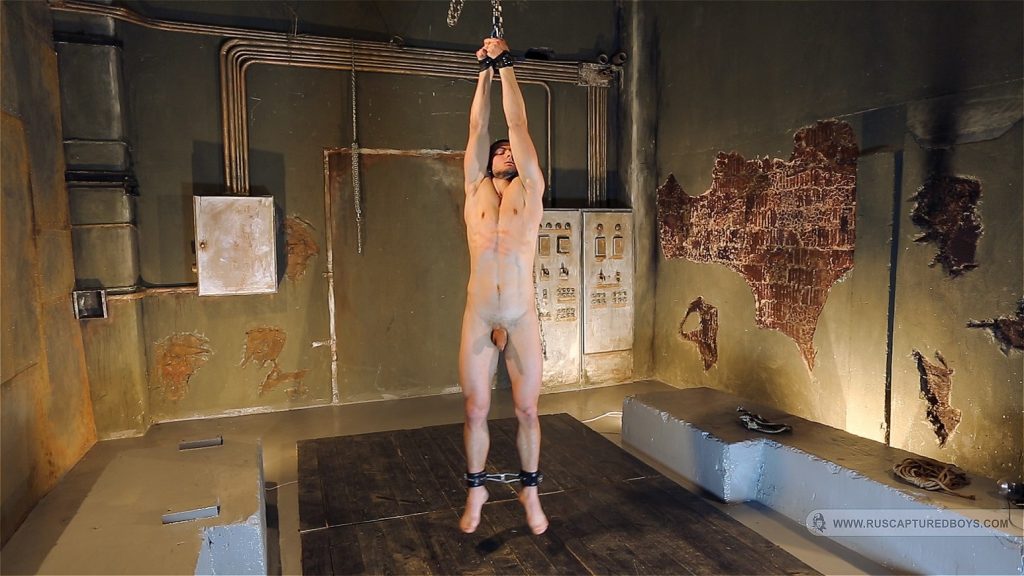 He heard voices. It was quite near that it was audible, but not enough to gain context of the discussion.

Stas was terrified, but also upset with himself for being so trusting and downright stupid. Why didn’t he try to sneak away from these people earlier, and now it might be too late.

He was terrified because he had heard of the rumors about a group of modern slavers abducting young, athletic men and selling them off to the highest bidders. He could tell without hubris that he fit the bill and looked like the missing guys he’d seen on the news

“Here’s the one you paid for,” said one of the men tersely. He appeared to be the one brokering the deal.

The other man, whom the broker had spoken to, didn’t say anything. He only stared at Stas, appraising him like a high-priced commodity. He walked around him like a predator cornering its prey. Still, no words came out of his mouth.

Stas avoided the man’s intense gaze. There was a certain twinkle in those cruel, black eyes that sent shivers down his spine. 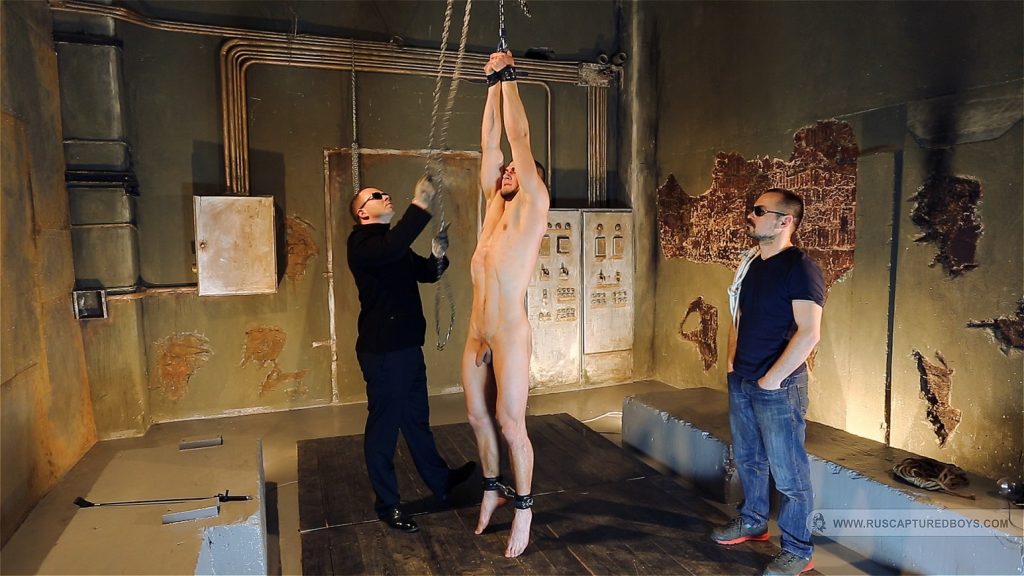 “Okay, you have a deal. Have the papers drawn and let’s wrap this up.” The man addressed the broker without breaking his gaze at this fine man, whom he paid a fortune for.

“Excellent. Please give us a few minutes to prepare the merchandise and the paperwork. Meanwhile, would you care to join the other guests at the concierge area and get some refreshments.”

“Great!” After a few moments, the client left the room, leaving the broker and his newly acquired property behind.

The broker maneuvered the lever to finally bring the slave down. Stas felt relieved that his feet finally touched the floor, transferring the pressure from his arms.

“Listen up, boy,” the broker addressed Stas. “Your new master has paid a lot of money for you and wants to take you to his own estate to administer your training against our judgment. But who are we to counter against the client’s wishes? All I will tell you right now is that you are to obey every wish your master commands. If by any chance your master becomes unhappy and returns you here for correction, I assure you that you will not enjoy the experience. Am I understood?”

“Yes, sir,'” was the only response from Stas, with his head bowed down, and metal cuffs enjoined by a short metal chain that kept his hands bound behind him.

In Stas’ mind he thought that he’d play along. After all he didn’t want to upset the broker further for that would only result in a round of beating. He just hoped that his new “master” would be kind, merciful, and gentle.

How very wrong he had been. 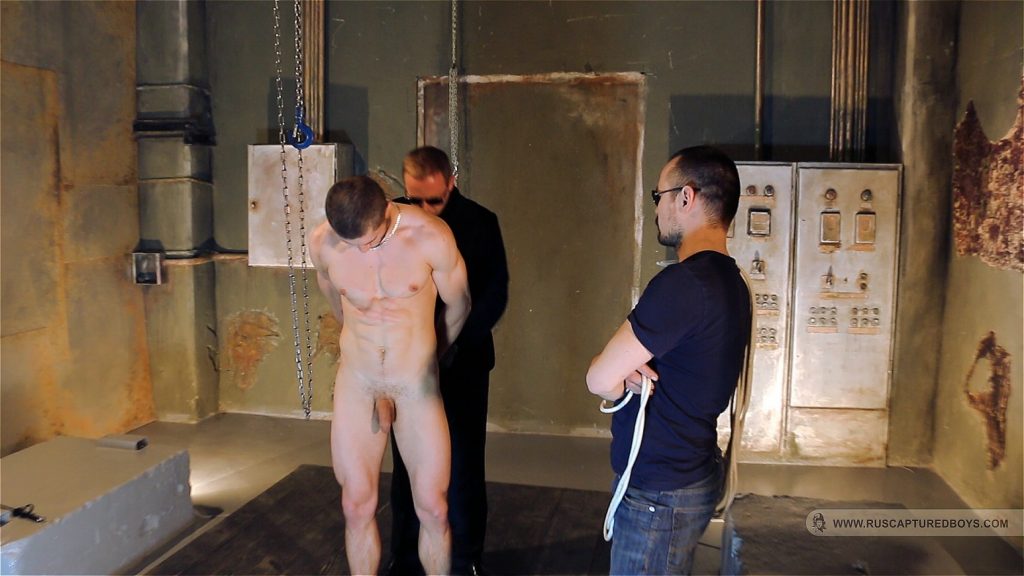 Author’s Note: The above short story is an impression of mine from the series on Russian Captured Boys. It doesn’t necessarily follow the description of the clip, but it’s similar enough that you can work your imagination and make the connection. If you want to see the videos to complement the story, you can check out RCB’s site. Enjoy!