Note: If you haven’t read part II of this gay bondage tale inspired by Bound Up Boy’s Master’s Toy series yet, click here.

The vision in his dream was clear. He was walking down the beach with a beautiful girl. He held her hands and strolled down the sandy shore with a beautiful sunset in the background. That setting couldn’t have been more romantic.

Trey recognized the face of that lovely woman. She was quite peculiar in school and somewhat a loner. Despite her slight oddity, however, she hid a well developed body. Oh, how he never paid attention to her back in school.

Now he knew why. He was a football star and he was supposed to hang out with the beautiful and stupid bombshells in the cheering squad. That was how the social order dictated it in school.

He just realized how foolish that sounded now. Regret set in and took over his mood. He should have had the guts to breach the silly social order then maybe he would’ve paid more attention to that gorgeous woman with a hot pair of eye glasses.

It was  too late for that now….

“Daydreaming, are we?” Master Alan slapped him hard on his right cheek. It immediately left a pinkish mark because of the hard blow.

Trey came back to his hellish reality. As soon as he did that, the pain all over his body throbbed. For a moment he was able to escape his horrid reality and reminisced the things that he could have been.

There was no more place for that.

It all gradually became clear that his fate as a slave boy had already started, and his existence now lay in the hands of the sociopath in front of him who called himself Master Alan.

“I think you’ve had enough of the wires,” Alan said as he began to detach them from his prisoner’s nipples. “Now let’s see your little butt and make sure they’re ready for me when I’m ready to use it.”

Alan locked Trey’s ankles to the leather straps attached to the suspension crane. He maneuvered the control and hoisted the slave boy’s leg up in the air, high enough that his ass was exposed for any assault with any instrument of torture. Alan truly enjoyed that power to cause this boy’s suffering just because he felt like it.

He then grabbed a flogger from the cabinet and came back by the bondage table where poor Trey uncomfortably lay on his back with his butt up in the air.

“Now you’re in a perfect place, just like how I wanted you to be for this next part of our game,” Alan said calmly.

He then braced the flogger and struck Trey’s butt. He saw Trey shook a little but didn’t make a sound. He just moaned from the impact.

Alan enjoyed observing the slave’s restraint. In the beginning of their training they always fought to maintain their dignity in the midst of suffering. It was an emerging pattern from all his captives.

Why exactly? He then realized that it was a test of wills between him and the slaves. Then he wondered why bother for he always triumphed over them because he enjoyed inflicting their pain. The more the slave held on, the more Alan got excited and even felt grateful because it meant prolonged pleasures.

Trey just groaned. His body had not fully recovered yet from the scorching session with the hot wax earlier, and here they were going through severe spanking. He wouldn’t have minded the spanking if his butt wasn’t the recipient of the paddle and the flogger.

Trey felt so weak that he didn’t even notice Alan unlocked his binds and sat him up from the table. Escape was definitely not an option here. The mad man deliberately gave him little water so he wouldn’t be able to revive his full strength. It was just enough to subsist. Nothing more.

Alan locked his slave up, spread-eagled on the web-chain. He loved how he set up the web. He loved it particularly more when it had a captive locked in place. The whole picture triggered an erection that he couldn’t stop. Not that he wanted to. The whole point of this whole session was to satiate that urge.

“Okay, listen up to the next part of our game, slave!” Alan announced and paused for a bit to ensure that Trey paid close attention. “I will play with your cock until you’re ready to explode but you will not come until I tell you to. If you do without my permission, I will have you strapped down on the table with electrodes turned on for the night. They are set to give you random shocks through the night that you’d pray you’re dead by the morning. It’s your choice.”

Trey didn’t even respond but he understood him completely. He felt how painful they could be and he didn’t want to suffer through that later so he just nodded.

Alan went to work right away. He started touching the straight prisoner on his chest, crawling and creeping his hands all over the boy’s stomach. 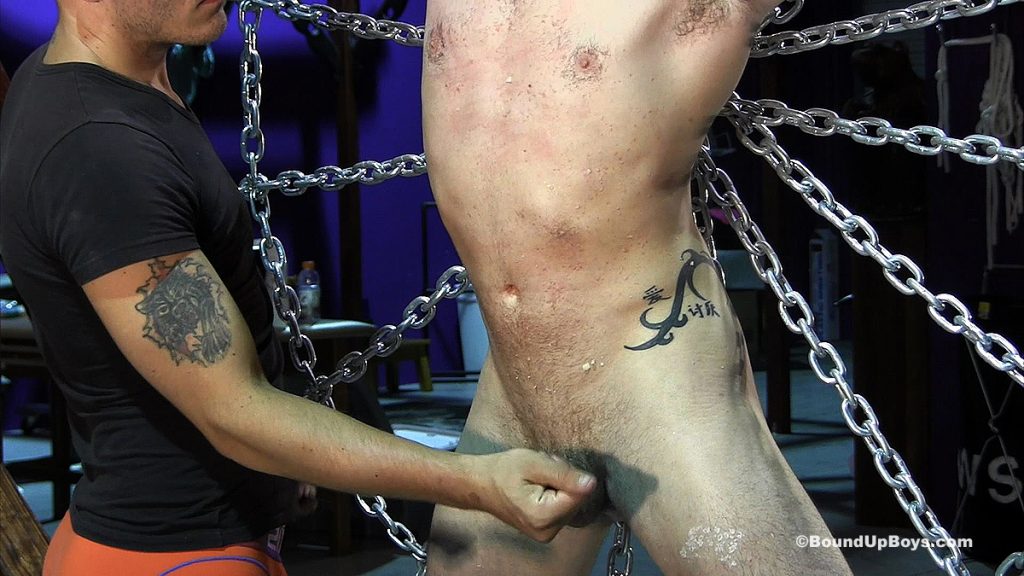 Disgusted. That was how Trey felt.

These hands were so rough. He wasn’t used to it nor he’d ever enjoy a man’s touch, but he was trapped with this pervert exploring his body.

Alan’s hands finally found their way down to the prisoner’s crotch and steadily fondled it. First they were light touches, just exploring the slave’s groin, but when Trey’s cock started to jump from the all the attention, Alan took it as a sign that his ministrations were effective.

Alan didn’t just jerk his poor victim off straight away. Some time ago when he was just learning what would make a man respond, he went straight for the cock and jerk a guy off right away. It never had the effect he wanted. Most of the time a guy would become unresponsive.

He eventually learned that the trick had always been to build it slow. The suspense must be there. It worked almost all of the time.

Just take the prisoner he had now for example. Trey was fighting it because he felt confused as to why he was getting turned on despite his revulsion of another man’s touch. In fact the mad man’s touches were so good that he felt his balls filling up.

“Remember that you are not allowed to come until I tell you to, unless you don’t mind the consequences.”

He wanted a release and shoot his load so badly but he didn’t want to go through a torturous and sleepless night. He tried to think of something else to distract his mind from sexual thoughts…but it only worked for a minute!

“Not yet…I want to see how far you can go without releasing.”

Just when he was about to open his mouth to plead…

“Okay, you may come, slave!” Alan said the words just in time!

Loads of semen flowed from Trey’s peehole. He felt relieved.

Trey didn’t even resist even a tiny bit this time. He just submitted to the next part of this twisted game.

If you enjoy this gay bondage story, watch the video now on Bound Up Boys!