NOTE: The following short story is a product of fiction. It’s inspired by the videos and pictures in a series called Thomas – 4 Years Later from a gay bondage fantasy site Dream Boy Bondage. Any similarity to real-life situation is purely coincidental.

Thomas opened his eyes and he saw nothing but darkness. He thought for a moment that maybe it was just a dream. It didn’t take a minute for him to realize that he was wide awake. The wondering was replaced by a thud in his heart when a feeling was replaced by another. At that point he was beginning to feel nervous.

Where the hell was he? 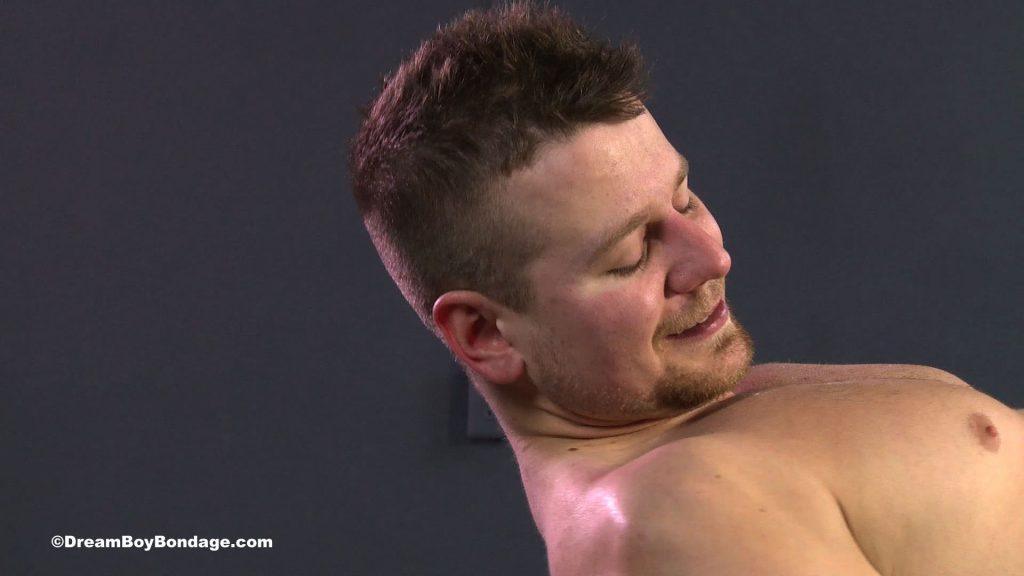 When his senses became quite alert, he tried to move his hands but they didn’t budge, nor did they swing in the direction where he wanted them to. It dawned on him that they were tied beneath him as he lay on a large wooden cross.

Someone had also taken his shirt off because he could feel the air kissing his toned chest, which also got his nipples excited as they hardened beneath the cool breeze. The realization that he was half naked added to his already brewing anxiety. The only thing that could prevent one from describing him as fully naked was the pair of blue underwear that his abductor deliberately left on.

His heart began to palpitate because it was clear that he was in a compromising position, and someone had rendered him completely immobile. If there was any consolation, he was thankful that they didn’t strap his neck down for he could still lift his head and look around.

Yet he saw was no one.

A silhouette began to form by the door. Thomas tried to make out who it was. Maybe one of his friends was pulling some prank and he couldn’t wait to tell whoever jerk it was, that this whole thing was not funny at all. 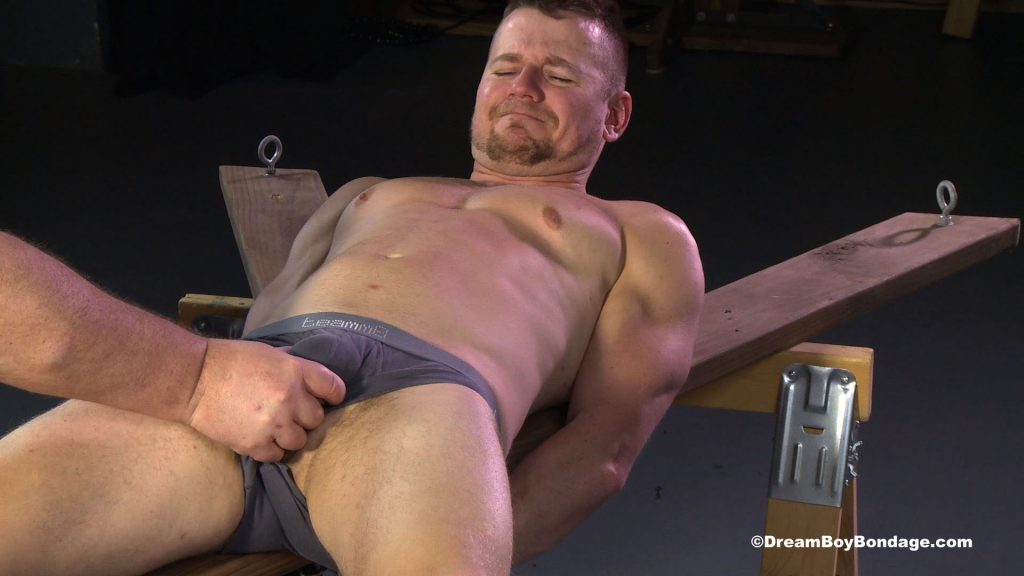 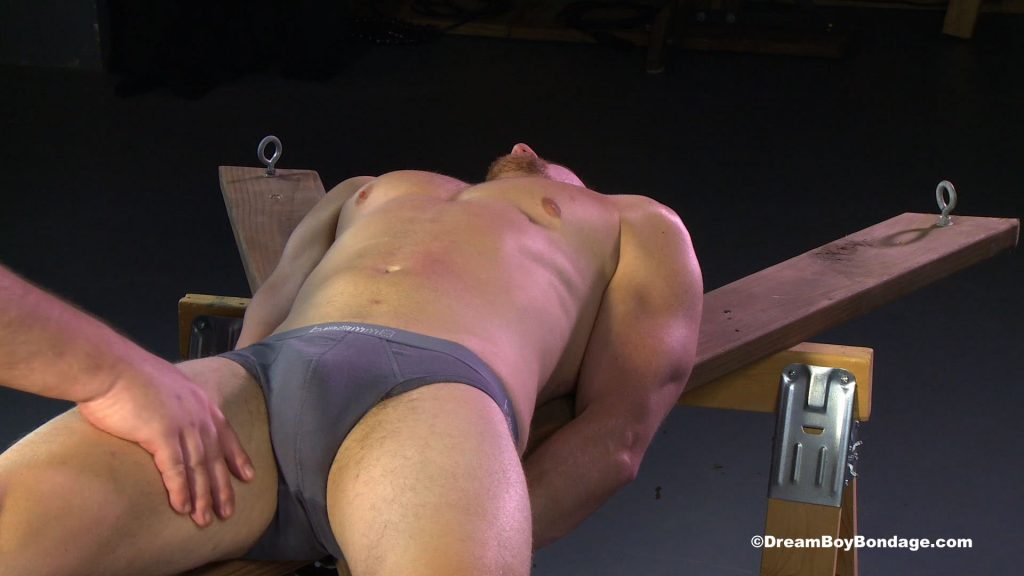 The silhouette moved slowly to the light where it started to spit out a complete image of a human being in flesh and blood. A man…but this man was a stranger.

Thomas was frightened. Very frightened. He didn’t know who this person was, nor he knew what the stranger wanted from him.

“Who are you? What do you want?” Thomas asked with apparent distress in his voice.

“Who I am is not important. You may just think of me as what I am to you: a stranger. What I want, however, may be of great interest to you,” said the Stranger in a steady and calm voice.

“Then please tell me what you want. My father is a very wealthy man. If you want money I can call him for you and ask for whatever amount you want. Name your price.” Thomas declared with feigned confidence.

The Stranger laughed at his response. “You’re quite naive, my dear boy,” said the man softly, almost like a whisper, while finally walking up to Thomas.

The Stranger ran his hand on Thomas’ chest, caressing both his nipples. “I have no interest in your father’s money. If you must know, I’ve already built my fortune around ways that I truly enjoy doing. Things that involve beautiful toys like you,” muttered the stranger as he continued to rub Thomas’ chest, while his hands were gradually making their way down to his legs.

The more the Stranger spoke softly while rubbing his upper body, the more Thomas became afraid of what would come next. He closed his eyes, trying to endure the anxiety of uncertainty, finding comfort in the intrusive touch, at least there was surety in it. It wasn’t long until the sensation of touch disappeared. Thomas then opened his eyes and followed his gaze towards the Stranger walking to a corner, where a black wooden chest sat.

The Stranger lifted the top to extract something. Thomas was trying to determine what the stranger was precisely trying to pull from it, for whatever it was wouldn’t be favorable to him. He knew that with absolute certainty.

Thomas finally saw it. The Stranger turned around holding a dreadful instrument–a black leather flogger. He realized that he was only minutes away from experiencing the sting that could result from being on the receiving end of this instrument of torutre.

“Shall we begin?” asked the stranger with a chilling smile.

Thomas didn’t even respond. He just closed his eyes for he knew that there was no escape from what was coming. His pain and suffering was simply inevitable. 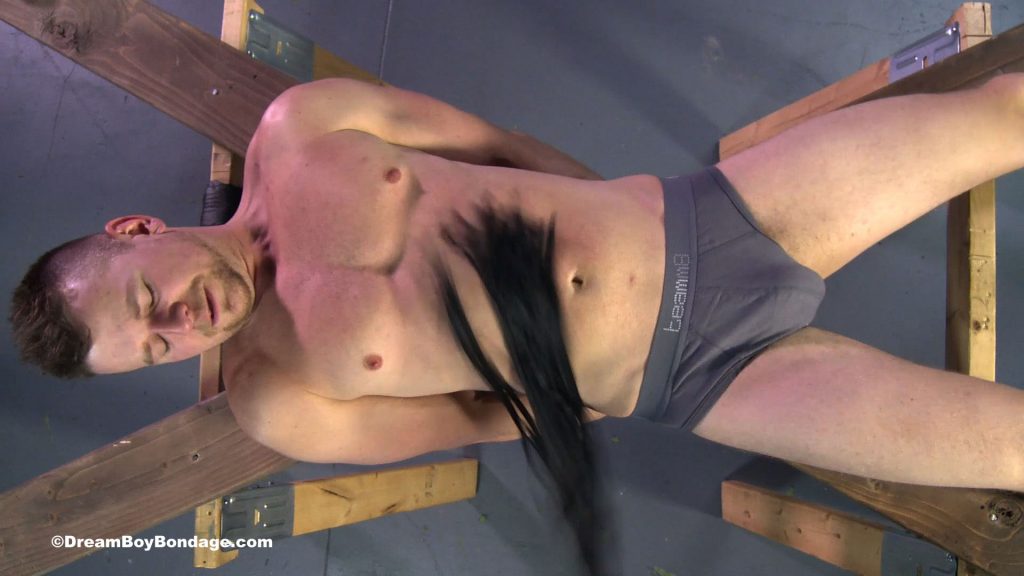 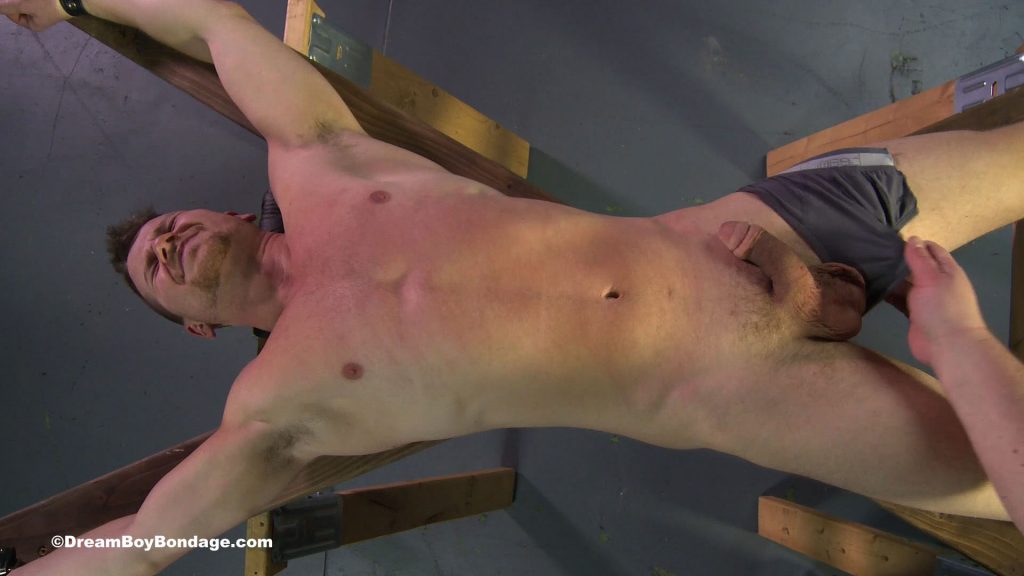 Author’s note: The story was inspired by a series from Dream Boy Bondage. The model’s name is Thomas. Check him out. He’s worth it!