When Dream Boy Bondage featured one of my favorite boys, I haven’t started my blog yet so I decided to share with you some stills from an older series. It’s called Farm Boy featuring the super delicious Nate. The entire series is made up of twelve episodes but I’ve picked out scenes that I really liked. If you want to see the entire series, you can just check out DBB‘s site and find “Farm Boy.” You may even get drawn to the other unfortunate dream boys that you’ll find in there. 🙂

So in the beginning of Part 4, we see Nate sprawled on the floor, looking very spent after he had just gone through a brutal whipping. But then again, it was just a preamble to a rather more intense bout of whippings. 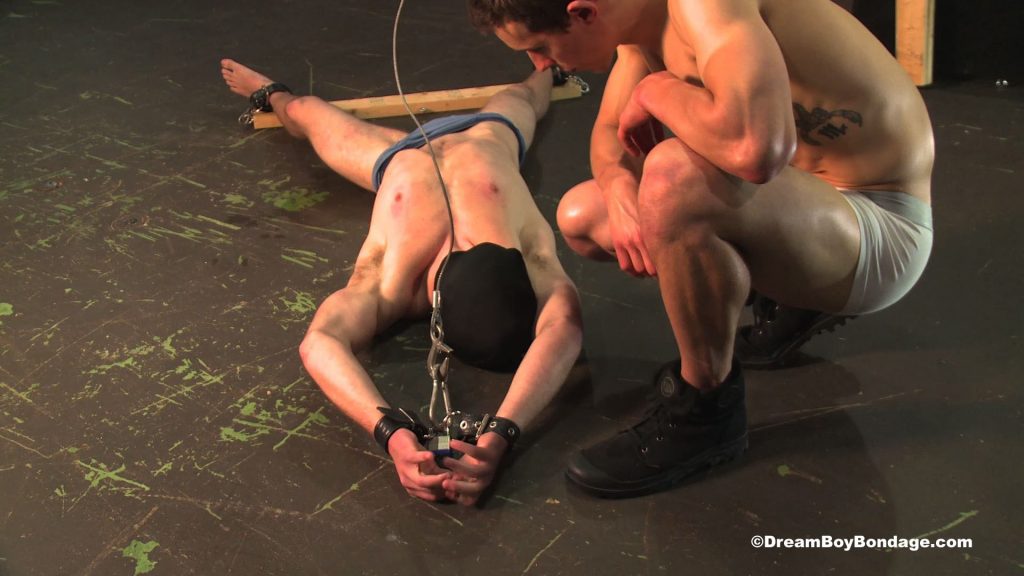 There’s something really hot about a boy being prepared for whipping. I particularly love that scene from where the pulley started dragging the tired slave from the floor to his feet, stretching his arms up above his head.

That’s about the end of Part 4.

In Part 5, we see the slave farm boy being tortured with clothespins finding their way to his nipples and his dick. Jared, his tormentor, is very much relentless in applying these horrid tools. He no doubt truly enjoys doing it, despite his stoic appearance. And that makes Nate’s tormentor more intimidating.

Of course, after the clothespins are set in place on Nate’s gorgeous body, Jared strikes harder with the leather flogger  on the poor lad’s beaten body in every direction.

Then to top it off, Jared treats Nate’s washboard abs as a punching bag.

when the whipping is done, Jared adjusted the pulley so Nate is fully stretched up, standing on tiptoe.

Jared and the master will leave him in that position for hours.